The last stop on our road trip was Charleston, South Carolina just a short drive north of Savannah

We stayed in this beautiful old house in central Charleston just off King Street. The rooms were pretty large and one of the most comfortable sleeps I had all holiday (especially after the haunted house in Savannah). We came back here for a quick bite to eat in the afternoon and the food on offer was surprisingly very good.

About 10 mins from our hotel we stopped in here on the first night to avail of their happy hour and try some local beers ($4 for local beers!). We ended up staying here for the evening and grabbing food. I got the pulled pork BBQ sandwich which was unreal and Sean got the BBQ wings which were very tasty! We got to try some gin here from the distillery across the road which was unbelievable (and I ran across the road to buy a bottle). 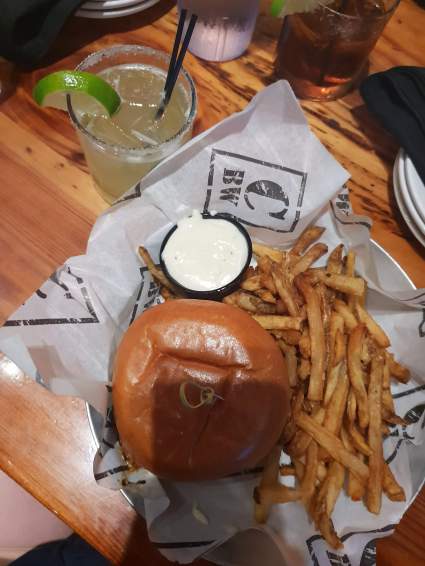 There are fantastic reviews of this restaurant online so we strolled up about 8pm and had a 30 minute wait outside before getting our table. We were brought upstairs and got to see just how massive this restaurant was. Their menu goes on for pages which made it tough to decide on what to get, in the end I settled for the seafood pasta (photo below), it was lovely but way too big a portion and the size of it put me off. Sean got the Alligator Po Boy which he mentioned was very nice.

On the way back from the Boone Plantation, we drove down to the waterfront and took a stroll around. There is a beautiful promenade that has the ocean on one side and stunning houses on the other. We walked up past the pier and dipped our feet into the fountain to cool down a little (it was approx. 35 degrees).

We took an early morning carriage tour around the city. The route you take is a lottery so we got the shortest route but got to see some interesting places along the way such as the haunted jail. The tour was an hour long and an interesting way to see some streets we wouldn’t normally see as they were a little out of the way. There are a large number of carriage companies in Charleston and I would recommend this company – we didn’t receive an email confirmation at the time, so I messaged them on Facebook and they responded instantly confirming our booking.

After the carriage tour we took a stroll through the city market which has hundreds of stands from handmade soaps, lemonade, jewellery, books, clothing and photos. We stopped off at one particular stall selling photos and picked up a few to bring home.

I popped in here to pick up a bottle of the amazing gin. We wanted to do a tasting but unfortunately you can’t do a tasting in South Carolina without doing a tour. As we have done so many distillery tours we decided to pass on this but still pick up some gin. The building looks lovely, it’s really central and it’s cheap!

We spent some time exploring the streets of Charleston, both on foot and in the car. This gave us the opportunity to see the city away from the tourist destinations. The city is stunning and full of beautiful, colourful architecture.