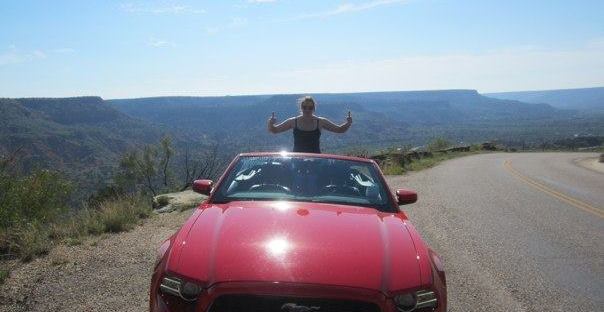 The second part of our Route 66 journey through the desert of the United States!

As we crossed over into Texas (at a dodgy crossing) we made our way to our next stop. Driving along the I-40 into Shamrock. Being Irish, I found this cute little town interesting, and a tad strange. Everything was Irish! There was a motel called the Blarney Inn and they were advertising the St Patrick’s Day parade (and a Donegal Beard Competition, apparently all Irish men have one). We visited the U Drop Inn, which is great for some photo opportunities, I think it is now a visitor centre but was closed when we got there. We didn’t hang around too long, but it was certainly a place we remember! We drove through the little town of McLean, which was quite close to Shamrock, where we saw the Devil’s Rope Museum (a museum of barbed wire!). We decided not to go in, so we kept going. Our next stop was interesting, the Bug Ranch in Conway. It was a line of VW Beetle’s in the ground and spray painted, similar to the Cadillac Ranch we would soon see. The thing I loved the most about Texas was looking out into the ranches and the little canyons as we drove along the highway. We arrived in Amarillo in the evening and got checked into our hotel. One of the things recommended was the Big Texan Steakhouse that is famous for its 72oz steak challenge. We decided to head there for dinner, and got a great steak. The place was packed and there were loads of people in the gift store and the bar waiting to be seated. It was a really lively restaurant, and well worth the visit!
The following morning we decided to head to a place called Canyon, just south of Amarillo where we went to Palo Duo Canyon (the second largest canyon in the US). After visiting the information centre, I had a bit of a freak out when all I could hear were rattlesnakes, so we decided to take a drive through the canyon, which gave some stunning views and photo opportunities! After spending some time driving around, we headed to our next stop, the Cadillac Ranch, with a dozen Cadillacs in the ground. As we walked around, we found tins of spraypaint on the ground so we could spray the Cadillacs. Between this and the Bug Ranch, they were cool to visit! Close enough to the Cadillac Ranch we got to see the Second Amendment Cowboy, which explains itself!
We continued on our way to the midway point of our trip at Adrian. There was a little cafe (probably called the Midpoint Cafe) that we stopped off and had some lunch in. We got a lot of photos of the midpoint, as did everyone else and then we headed towards New Mexico, taking in our last stop in Texas, Glenrio which has been completely abandoned. Apparently in the 1920’s this was a bustling hub, with a railway station, hotels and shops. As this little place was off the main road, we drove around for the little bit spotting all the torn down houses and shops before deciding not to go back on the main road, and instead follow a little dusty dirt road. I decided to drive this, which turned out to be interesting. I could see someone walking in the distance. We were miles from anything and as we got closer I noticed it was an old man in hot pants pushing an empty pram. We drove pretty fast after that!
New Mexico:

As we crossed over into New Mexico we headed towards Santa Rosa and the Blue Hole, and 80ft wide and 80ft deep well that has waters so clear you can see to the bottom. You cant swim here, but it attracts many scuba divers that you can look at in the well. From memory, I believe we took the old Santa Fe trail from Romeroville into Santa Fe. Before getting to Santa Fe, we decided to visit Las Vegas, NM. This was real old town America. The large buildings dotted along the square in the centre of the town were beautiful, an d made it such a postcard town. I remember walking the streets around the town and stopping off for lunch, but sadly I can’t remember where!
We stopped off for the night at The Lodge in Santa Fe, which was a beautiful hotel that served amazing Margaritas! It was the first time in about a week we stayed in a decent hotel. That night we got the hotel shuttle bus into the town and the driver recommended a restaurant that we checked out. The following morning we went for a walk around Santa Fe, where we had amazing (and very expensive pancakes!) in The French Pastry Shop before taking a walk around the town. There was an old car rally on and they were leaving town as we came across them. It was interesting to see all the old and very expensive cars! The town was lovely and the buildings are very picturesque. We stopped off in some little Christmas shops that had some cool decorations, and I picked up a hot air balloon decoration. We decided then to get back on the road and head towards Albuquerque.

We parked up and walked through the Old Town and stopped in some gift shops where we got a pretty cool painted skull to bring home with us.  We stopped off in a tourist office to see if there was any info on Breaking Bad. There were no leaflets or any info so we asked the people behind the counter who laughed and handed us a print out map with the key locations on it, while also trying to convince us to visit the Rattlesnake Museum that had some famous snakes from the movies. We declined. We set off on our tour to see the famous Breaking Bad locations and we found the car wash, that looks exactly like in the show! Next we went to Saul’s office which turned out to be a strip club. We had a look at the map and noticed the area around Walter’s house had been blacked out so people couldn’t find it. From memory of the show we decided to see if we could find it. We pulled into an estate and drove around remembering the drive up to the house and we some how found it on the first attempt! There were three people sitting in the open garage clearly unhappy we were there and the house had plenty of “Keep Out” signs around it. After taking a few cheeky photos we headed off.

The drive through New Mexico was very deserty, and totally different than what we had seen previously. We could be driving for miles without seeing any kind of town. I had said I wanted to check out the Wigwam Motel which was in Holbrook, Arizona so that was our aim for the night! The drive from Albuquerque to Arizona was pretty uneventful except for the scenery.

We got to Holbrook in the late afternoon and saw the Wigwam Motel that was all booked up. It was raining quite heavily so we decided not to hang around apart from getting a few photos. We looked at the map and decided our next stop was Winslow, which was made famous by The Eagles song Take It Easy.  As we drove towards Winslow, we drove into a huge thunder storm that was unbelievable to see. It was dark when we got to Winslow, but we did get the see the Ford truck  statue on the corner. We made for the first hotel we found, La Posada. The hotel was stunning, a google image search will show you why! Unfortunately they too were booked out, so we had some dinner in the restaurant to figure out what we were going to do as it was getting late and the weather was shocking! We decided to head on again, towards Flagstaff, as this was a bigger city we were sure to get accommodation.

We got to Flagstaff about 9:30 that night and stopped off at the first roadside hotel we could find. I wasn’t keen on sleeping in a $30 motel just yet. There was a lane full of hotels and after the third one I was told that the university had a parents weekend and all hotels were sold out, I was given a list of hotels and their phone numbers so we sat there and called every hotel until eventually we got a Howard Johnson room for the extortionate  rate of $200 for the night. As we were leaving Winslow earlier that night we spotted a meteor crater along the way, so we decided to head back and visit it the following morning. It was a massive crater in the middle of the desert that we spend the morning checking out before heading to the Grand Canyon. The drive to the Grand Canyon was a two hour drive, after the two hours we realised we were at the entrance to the Grand Canyon National Park, so had another hour or so to go. The drive along the canyon was amazing, but was nothing compared to seeing the canyon itself. We got parked and went for a stroll around. We were concious about where we were going that night so we didn’t spend a huge amount of time in the canyon. We got some great photos but didn’t venture down into the canyon, due to time and my horrific fear of snakes.

We then took off on our next trip, which was a little off the track of Route 66, but who cares! The four hour drive to Vegas began! We headed back towards Kingman and then up towards the Hoover Dam!