The beginning of my first trip to Asia.. two days sightseeing in Ho Chi Minh which included boat tours, amazing pizza and a horrible snake.

Our main trip of 2015 was Christmas in Vietnam! I had never been to Asia before and was looking forward to spending two weeks traveling around Vietnam and seeing all it had to offer!

We left Dublin on December 20th and set off on the first leg of our flight to Dubai. We flew through out the night and the most interesting part of this was flying over Syria and Iraq looking down on what looked like burning oil fields and seeing a number of planes below us flying at speed. As the sun rose we could look down on the vast mountain ranges below us.

We landed in Saigon around 7pm and traveled to our hotel by taxi. Driving through the streets of Saigon was an eye opener to how the Vietnamese drive! Seeing hundreds of mopeds on the streets with families of 4 to a moped was something you don’t see in Dublin! We arrived at our hotel (the Pullman Saigon Centre) where we were based until Christmas eve. We headed to the rooftop bar to see the night view across Saigon and a few drinks before turning in for the night.

Saigon from our hotel room

At 7am on the Tuesday morning we were collected by the Les Rives tour company to begin our speed boat tour to the Cu Chi Tunnels. We set off from the dock with about 6 or 7 other tourists for our one hour trip up the Saigon river to the tunnels. On board we had breakfast and I was introduced to Vietnamese Coffee which I have developed a strong love for! This coffee served with condensed milk and ice is sweet and refreshing and very easy to get addicted to! We arrived at the tunnels around 9am before most of the tour buses arrived, which is a huge benefit of doing the tour by boat. We watched a small documentary about the tunnels and viewed maps of how far the tunnels spread through the Vietnamese countryside, we then continued through the woods to a small tunnel entrance that is now used to show tourists how small and narrow these tunnels are. One lady got in and was a little worried about how claustrophobic the area was, so Sean decided to give it a go. Being 6 foot 5, he barely fit. He was able to get into the small space but couldn’t bend down enough to close the roof of the tunnel entrance. 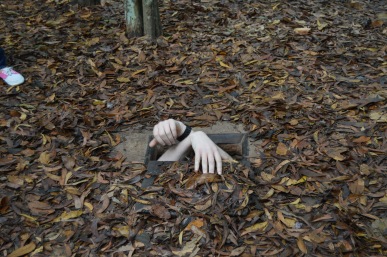 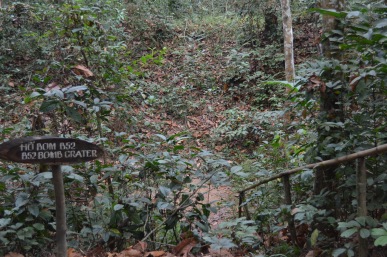 We continued along the woods and were told about the kitchen areas where the Vietnamese soldiers were able to cook underground and how the steam and smoke would escape from the tunnels. Considering just how many Vietnamese lived underground its very impressive to hear how they survived and for so long. We got to the shooting range and decided to treat ourselves to firing and M30 machine gun which Sean thoroughly enjoyed. Sadly I didn’t realize there were targets and fired aimlessly into the distance.

Next we moved along to the tunnel which was widened so us fat Western tourists could fit through (just about!). We were told by our guide that the tunnel had three exits, one at 30m, 50m and 100m, we both thought the 100m would be no problem to us! One by one we went down the steep steps and into the very narrow and very low tunnel, which somehow was double the size of the original tunnels. After a few minutes I realized I would need to crawl along the cold tunnel, at the same time the light from the entrance vanished. We continued through the tunnel in the darkness and as we started to slow down I got very claustrophobic and made my way to the 100m exit… once out I realized I had only made it 30m through the tunnel.

Once we all made it out, we moved along to have some food the Vietnamese survived on during the war, Tapioca with salt, sugar and peanut dip. Its not something I would eat everyday (or ever again). Before heading back to Saigon, we had traditional Vietnamese lunch on the riverside where we got to chat with the other tourists who were on the trip with us.

We spent the afternoon strolling around the markets of Binh Tay before strolling down Nguyen Hue which was beautifully decorated in green and white lights. On our way back to the hotel we stopped off at the night markets where I hadn’t fully developed my haggling skills unfortunately and ended up with a nice new bag, which cost a small fortune.

On our second night we grabbed a taxi and headed out for dinner in a pizza place I came across online. We got out of our taxi and it took a while for us to find 4P’s on Le Thanh Ton. I ordered a local beer and a Burrata Prosciutto which was truly amazing. The company make their own cheese at their farm in Da Lat.

We were up early again on Wednesday for another tour with Les Rives, this time to the Mekong Delta. We traveled by boat down the Saigon river and into the Mekong delta. One aspect of Saigon we saw was the poverty along the river with a huge number of galvanized houses that line the river bank as you travel away from the city. Our first stop was a temple on the outskirts of Saigon where we got information on the religion in Vietnam. We had a very brief stop here before continuing down the delta. Our next stop was to a local rural house where we learnt about how villagers survive in the delta, we also got to meet the family pet, a very large snake which I was terrified of! I didn’t feel like hanging around here for long so we set off again through the narrow canals of the delta. Our next stop on the trip was at a local house where we got to try some fresh coconut, along with some Mekong Whiskey which was rather tasty. We sat in the garden of a gorgeous house looking out over the water as we drank our whiskey before setting off for lunch in a local orphanage. We pulled up in a local town and began to walk through the markets where we saw a local woman killing and selling frogs, fish and chickens. I think I lost my appetite when her daughter was beheading the fish with a scissors. We took our seats in the orphanage where we had our lunch (I decided not to ask what was on the menu!) We then visited another Pagoda before heading back to Saigon for the evening.

I would highly recommend anyone visiting Saigon to do the tours with Les Rives. They have many options available and for me the speed boat was better than sitting in a bus to get to the tunnels or the delta! 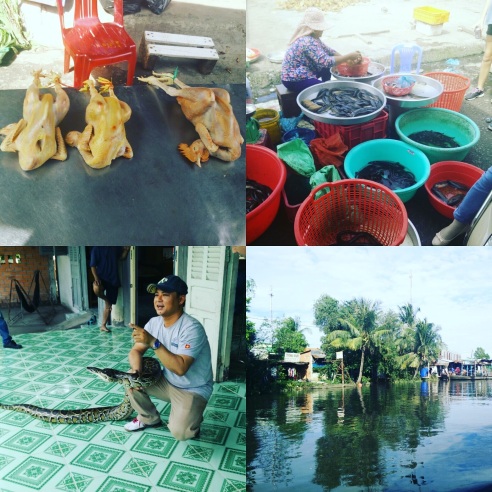