A description of our time spent in the Hanoi Old Quarter, which to me was a nicer city than Saigon.

On December 26th we flew from Phu Quoc to Hanoi where we were staying until the 29th December. We were planning on visiting Halong Bay but sadly we never got the chance to. We booked into our hotel, the Hanoi Morgans Hotel where we had randomly booked the presidential suite (it was pretty shit but has since been renovated). The staff were lovely and provided us with a map of the Old Quarter and some recommendations for food.

We set off on a stroll to find somewhere for lunch and decided to check out the managers recommended restaurant, Quan an Ngon. We sat in the gorgeous terrace to plan the rest of our day. After this we went to Hao Lo prison (what remains of it), where John McCain was held during the Vietnam War. I found it interesting to see that most of the prison was destroyed to build a really ugly sky scraper. We continued along our walk of the city and went to see the night markets, which I loved. The city was so busy at night and the stalls were selling everything  you could imagine. We decided to stop for a drink in a small little bar where we sat on tiny stools outside watching people walk by. The buildings and the atmosphere made Hanoi much more enjoyable than Saigon. We visited Green Mango for dinner, which I really liked (Sean wasn’t a fan, I think because it was similar to a western restaurant).

The following morning we woke up and got a taxi to see the Ho Chi Minh mausoleum. It has very limited opening hours so you have to go in the morning. As we drove along we could see a huge queue and were sad to see just how long it really was. Our taxi driver drove (for another 5 minutes) to the entrance to the park, where we then had to walk all the way back to the end of the queue. As we walked along we saw just how far the queue went on the inside of the park and how it wound around trees and statues and seemed never ending. We continue our walk back and decided it wasn’t worth a possible three hour queue sadly. We had a look at the guide book and decided to try the Imperial Citadel instead, and we weren’t disappointed. The grounds were lovely and walking through the different buildings gave us a glimpse into the history of the country. After a while, and with Sean’s ankle starting to hurt we went to the near by Cong Caphe where I succeeded in ordering a cocktail before realising it was 10:30am. Ah holidays! 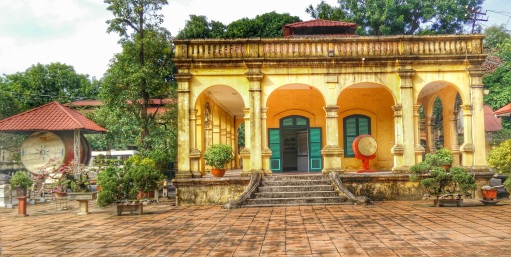 We decided to grab some lunch and found a place in the guidebook that looked close by. Sadly after much searching it didn’t actually exist so we decided to look for the next closest restaurant. We found (and loved) KOTO, which is a foundation set up to help young Vietnamese people train as kitchen staff, chefs and waiters. We just stopped here for a quick bite to eat, but ended up having a three course meal. For the first time on the trip I got beef (Pho) and loved it! It was one of the nicest beef dishes I have had in a very long time. I also got a chocolate orange cheesecake along with a baileys vietnamese coffee, and Sean got an apple crumble which were both amazing. We were sitting upstairs but when you see the desserts at the entrance you cant help but get one!

We continued on another trip around the Old Quarter and stopped off in Le Pub for a drink or two. They did good cocktails and it was nice to sit on the street and watch tourists and locals wander past. Along our walking tour I made friends with the cutest thing ever, a little pug in a frog costume. We continued on our walk to a small street full of pubs and restaurants. The first pub we saw was full of tourists so we went to the empty pub across the way, Hay  and then onto Mao’s Red Lounge both on Ta Hien street. Our next stop was to a shisha bar where we got chatting to some Aussies (and one Kiwi who Sean managed to insult by saying he didn’t want the All Blacks to win the RWC). We were told the owner of the bar was only 18 and his 11 year old brother was helping out in the bar (which was also a school during the day). I needed to pee so decided to check out the toilets, and I’m still not sure how I was meant to use them… the ladies was a long urinal with little steps that was fully open and visible to those in the bar. I thought better of it and went back to my drink. After a drink and me still needing to pee, we headed back to our hotel! 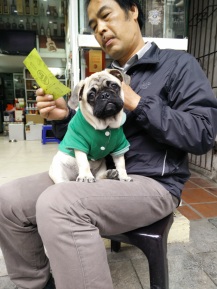 The following day we woke up late and decided to head to Dunkin Donuts for breakfast, after one odd looking donut I spent the next while getting sick. Once I felt I could move again we set off for the day. We decided to visit the wholesale market of Dong Xuan which was an old (probably never used) shopping centre, crammed full of small market stalls. In the centre was an unused fountain with broken escalators. We had a look around and picked up a few things, my haggling had much improved since Saigon (thankfully!). We decided to visit a recommended Indian for lunch and made our way back through the Old Quarter until we found Foodshop 45. We had heard that the water-puppet shows were meant to be quite good, so after lunch we tried to buy some tickets. Unfortunately, they were all booked out for the day so we went back to Le Pub to rethink our evening. I decided to do a little shopping and we went to get me a nice new Kipling bag (yay!) and some posters for our apartment. We found an old propaganda shop on Ta Hien street where we spent the next hour deciding on what to get. We strolled back to the hotel to chill out for a while and were greeted with our bed decorated with flowers, a Vietnamese dessert and a lovely hand written note for Sean and I from the hotel staff (which is now framed at home). After relaxing in the hotel we chose to head back to Quan an Ngon for dinner and were unsurprised to see a queue out onto the street. We eventually got seated and got yet another good meal. After doing a little bit more walking (we got lost) we came across some interesting buildings and eventually made our way back to Cong Caphe beside St Jospeh’s Cathedral, who for some reason wont make half the cocktails on their menu. We then went back to our hotel as we had an early flight to Hoi An. 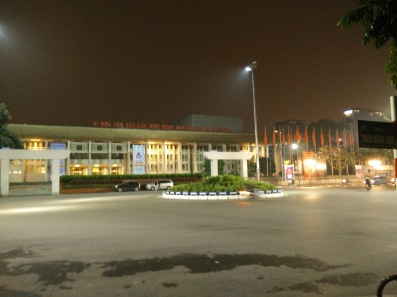 Afternoon strolls Marlay Park today while the weather was somewhat good!
On my first night out since baby Ben was born I took a little visit out to @damimmo_dublin finally and it didn't disappoint! The food was amazing and tiramisu especially was unbelievable - and I didn't care that the table of 4 beside us shared one, while I devoured this all by myself 😍😍😍 would highly recommend for a visit!
A little bit of Friday shopping in Kildare village! Ben benefitted from this more than I did 😭 . . . . . #kildarevillage #kildare #shopping #outlet #home #maternityleave #friday #weekend
Barrel aged Old Fashioned for Christmas 😍🥃🎄 . . . . . . . #oldfashioned #cocktail #cocktailsofinstagram #whiskey #whisky #christmas #whiskeygram #aged #masterofmalt #dublin #drinkstagram #whiskeyporn #happychristmas
My new favourite post pregnancy drink is randomly a glass of port - it adds to the festive feeling and is surprisingly super tasty! I've had two gins since the little guy was born, but thinking my love for gin is now gone and has been replaced by this! 😭 . . . . . . #port #christmas #festive #gin #tawny #tawnyport #newdrink #thecocktailtourist #winter #drink #portwine #drinks #wine #instawine #winelover #winetime
Loving this Bathtub Gin aged in Pedro Ximénez and then (my fav whisky) Bruichladdich cask! 😍 Amazing mix of gin & whiskey and it makes me super happy to have found this! . . . . . #BathtubGin #Bruichladdich #pedroximenez #whisky #whiskey #gin #happy #cocktail #drinks #dram #drink #scotch #Christmas #sherry #cask