About 3 years ago I was in Germany with Sean and I tried Monkey 47 for the first time, and this kicked off my love of gin! Up until that point I had only tried Gordon’s with a bit of flat tonic so I branded all gin with having the same crap taste. Since then I have really taken to gin and living beside The Headline with its own gin bar probably doesn’t help!

Back in August, Sean got me a present of a trip to the Listoke Gin School in Drogheda where we could spend an afternoon finding out how gin is made and also make our own bottle.

We arrived a little bit early for our session (1pm – 5pm) so we went for a walk around the grounds with a G&T in hand, I was delighted that the only rule was ‘no empty glasses’. There were two very cute dogs running around the courtyard who were very friendly and did a great job of getting all the other visitors chatting before we moved inside to start the tour. Once it reached 1pm we went into the beautiful room in the converted barnyard where we were introduced to our two hosts for the day. We all got a refill (the first of many!), we were brought to see how gin was made and to hear about some differences between various types of gins. After all the whiskey distilleries we have been to over the years (there has been a lot!), it was great to see how gin making varies from whiskey. Listoke is a very small distillery, in the middle of the country and everything was done in that one small part of the barn. When we finished with the tour, we were brought back out to the main room where we were shown the key ingredients for gin, along with seeing the main botanicals which get added before distillation. We then got to sit down with three different types of gin and were asked to give our thoughts on the flavors and smells – from this we would have an idea on what kind of gin we wanted to make. I decided to go for a mix of coconut, orange, cinnamon and rose – I did end up with one of the strongest gins post distillation but got the change to water it down (slightly). While the distillation process was happening, we got to sit down with some meats and cheeses which were well needed after the amount of gin consumed 🙂

Once the gin was distilled we were able to bottle and label our own for take away! The Gin School was a fantastic day out, and is something very different than any other distillery we have been to. It is expensive but for 4 hours of unlimited gin, great company, fantastic food and a take away bottle of gin it is highly recommended.

Along with it being a great day out, it also happened to be Louise’s 3rd anniversary, which was a nice way to celebrate as she also had a strong love of gin! 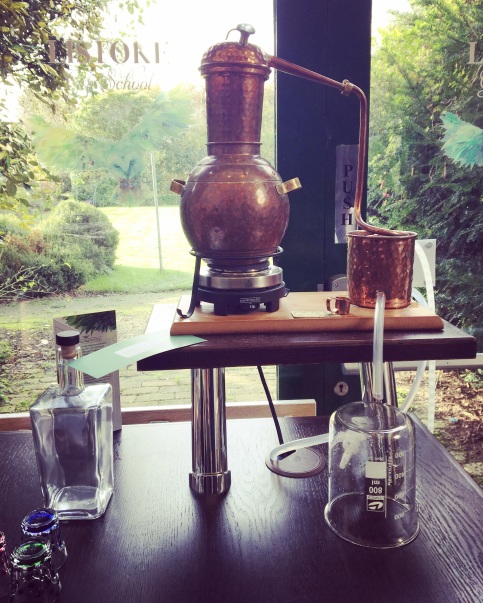 We booked into the D Hotel which is in Drogheda town, only a 15 minute drive from Listoke as we felt we would be having a lot to drink throughout the day. The hotel room was very big, with a huge bed (Sean was delighted about as I wouldn’t be kicking him in my sleep). The only bad thing about the room was that is was very bare and pretty bog standard – for the price of the room it wasn’t anything special. We went to the hotel bar in the evening for a drink which was fine. The breakfast the next morning was a huge selection and pretty decent. If we were going back to Drogheda I think we would stay in a B&B instead of here.

I had looked up restaurant ideas in Drogheda and this place came up quite a lot so we made a booking for Saturday night. Its in the basement of a building in the centre of the town and is really cosy and nicely decorated. There are a couple of little seating areas but we were in the middle of the main restaurant. As a starter we got the bruschetta and chicken terrine and both were delish! When it came to the main course I got the burger and Sean got a steak – there were actually no tapas dishes on the main menu and only noticed later there was a separate Tapas menu – anyway we were both pretty happy with our main courses and the burger was one of the best I’ve had in a long time. I got a sticky toffee pudding for dessert which was unbelievable and we had a full supply of cocktails for the night. All in all the food and atmosphere was fantastic and I would strongly recommend a visit. They have also opened up a restaurant in Rush which I plan on visiting in the future.