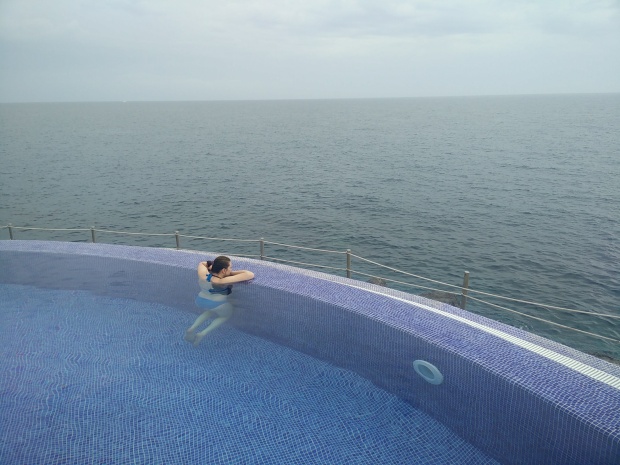 In September 2016, for the first time ever, we went on a sun holiday! After the few trips we have taken already this year (Vietnam, Boston, Germany and Paris) we decided to take a week in mid-September and head to Gran Canaria for a week in the sun! Don’t forget to check out some photos at the bottom of the page!

This was my first time to the Canary Islands and I wasn’t too sure what to expect. We had decided to stay in Puerto Rico and I booked an amazing apartment at the Marina Suites – it was a little bit more expensive but had a great balcony and the pool was unbelievable! If we ever do return to Gran Canaria we wouldn’t hesitate to stay there again!

We ate out most nights while on holidays and was surprised by the quality of the food, below is a quick review of the places we went to.

La Cantina: We saw this on TripAdvisor and decided to check it out. It was by far the best meal we had in Puerto Rico. I got a pasta with Salmon dish and Sean got a pizza. The pasta was beautiful, and I could easily have had another portion!

Blue Beach: While at the Amadores beach we checked this place out (mainly because they let me use their bathroom earlier in the day). Sean had pasta and I had a pizza and a couple of cocktails. I wasn’t expecting much but the quality of the food was pretty good. We returned on our last day and I got a large pasta dish while Sean got lasagna. Both were really tasty and didn’t disappoint.

Toro Bravo: We got in late on our first night and this restaurant was close by so we decided to check it out. We both got a steak and it was surprisingly really really good. The chips were undercooked and cheap, and the veg was very salty, but the steak almost made up for that.

Taste of India: We went here because of the Trip Advisor reviews, some of which said it was the ‘best curry ever’. Mine wasn’t that good, but Sean really liked his and he would happily go back. The naan bread and the sauce was lovely, but it wasn’t amazing. The cocktails here were pretty good tho!

We only checked out two beaches while we were on holidays, ,mainly because out pool was unbelievable!

Maspalomas: We checked this very sandy beach and was not disappointed. It was busy, but not overly so. The beach seems very very long, and everyone was pretty well spread out. We spent most of the afternoon here before taking a quick walk around the sand dunes. I really wanted to do a camel ride, but we couldn’t seem to find it.

Amadores: On our way back from Puerto de Mogan we stopped by this beach as we had heard some good things about it. As you come down the hill you see the beautiful clear blue water and cannot wait to dive straight in. To get two loungers and a parasol for  the day it was only 12 euro. This is a man made beach, but as its between both Puerto de Mogan and Puerto Rico there are not many English tourists here – mainly German. After we checked out of the hotel on our last day we spent the whole afternoon here.

Aqualand: We decided to get up early on Tuesday and spend the full day in Aqualand. Upon arrival I couldn’t see many slides, so I was a little hesitant. We paid 28e each to get in along with further 3e for a locker and 4e each for a lounger. Once we got settled in we decided to go on one of the largest slides in the park. We could go on this together and I was a little bit nervous as we took off, and it turned out to be amazing – we did pick up a huge amount of speed and hit the top of the slide (I didn’t see anyone else get this high up). We went on this a couple of times, one of which we went a bit too fast on! The next couple of slides were just as fun as we could do them together. We both had a great day here and was tempted to go back again! As we went in late September there were no queues to get in or to go on any slide. The only downside was the food – it was over priced and terrible! They also had a lot of cats, one of which had kittens that were a few days old and looked super cute!

Inland Drive: We spent one day driving to the centre of the island. As we took off through the narrow country roads, we started to climb at quite a quick rate. The scenery was amazing, we were really out in the middle of nowhere with no one around apart from the odd cyclist. It took us a couple of hours to reach the little town we wanted to visit, Tejeda, and once we got there we had a quick stroll around and settled down for some lunch. Funnily enough this was the least touristy place we visited on holidays and was also the worst food we had. After lunch we headed back down the ‘main’ road, which still took 1.5 hours to get out onto the motorway.

Afrikat: The one thing I wanted to do on our holiday was go snorkelling and do some form of watersport. The reviews of Afrikat were amazing and we could only get an evening time on the last day of our holidays. As we were boarding, we saw other catamarans going out on similar tours – which were all jam packed with tourists, thankfully Afrikat only allowed 35 people on board and they had room for everyone to lie down and relax, which the other tour boats didn’t. The two tour guides were lovely and good fun. We also had all beer, sangria and dinner included in the price (45e each). After about 1 hour and 15 mins we stopped close to a beach and were here for 2 hours. The first thing was to visit a cave by speedboat – we thought we could go into the cave, which wasn’t the case but we did get to see loads of crabs running around the walls of the cave. After our trip to the cave, it was time to go Parasailing – I was nervous about this but absolutely loved it! It was 25e each for about 10 minutes. After that we went snorkelling and swimming before chilling out on the boat before heading back to land. We did get to see the sunset on the way back which was beautiful.