We booked a last minute night away over the Easter weekend to Mount Juliet Estate in Kilkenny, which I had always heard great things about but had never visited.

As the Leinster game was due to start at 3:30, we decided to get down a little bit earlier for a bit of lunch before the game, and to avoid rushing afterwards. We got checked in to our rooms in Hunters Lodge, which was absolutely beautiful – both the room and bathroom were huge and decorated beautifully (except for the bathroom locking from the outside). 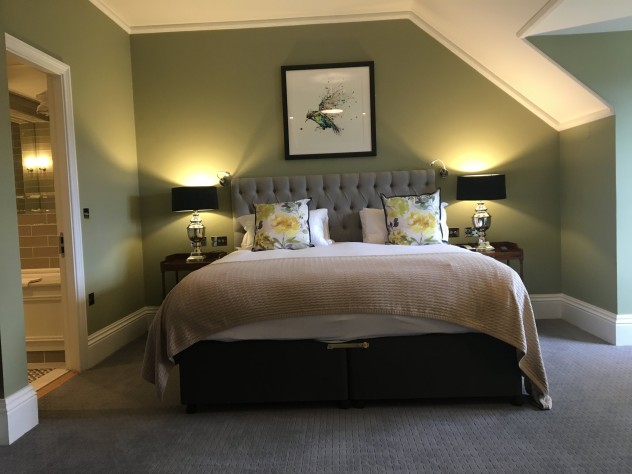 After we checked in we decided on a quick swim in the pool – so we found our way to the health club (it’s not the easiest to find!) – the pool is huge, with a couple of different alcoves, including a little cave. There is also a steam room and sauna, along with a large fully equipped gym.

As it got closer to the start of the game we headed towards the bar. I asked the barman if we could get some food and was told no food was allowed in the bar, which was a shame but fine. After a few minutes we saw a couple a few tables down eating two main-courses, a bit annoyed by this I asked the same barman and again was told there was no food allowed at all in the bar. I checked with him to make sure the rugby was definitely going to be shown and was assured it was. As it approached 3:30, another table in the bar received their food (I was pretty pissed off at this stage) – and we then overheard the bar man telling a couple there was no rugby being shown on the TV as they didn’t have the channel.  Pretty shit experience for the start of our stay.  We made our way across to the clubhouse where we were allowed get some food and watch the game (its generally only open to members at the weekend). On the way back to the hotel, I spoke to the bar manager and told them what happened, and that if exceptions are being made to be honest and explain that – whereas the barman was just rude as people enjoyed their meals around us. 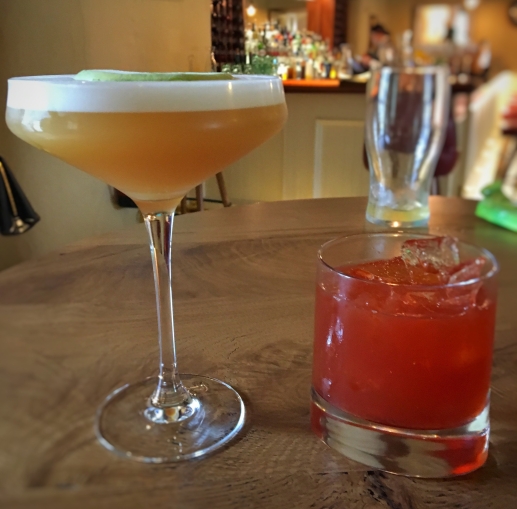 After the game, we got a couple of cocktails which were lovely – and then took a stroll down to the Manor House for a few more drinks. The weather was pretty shit, but we walked quickly and in no time at all, had another cocktail in front of us. The Manor House was beautiful, much more character and atmosphere than Hunters Lodge. 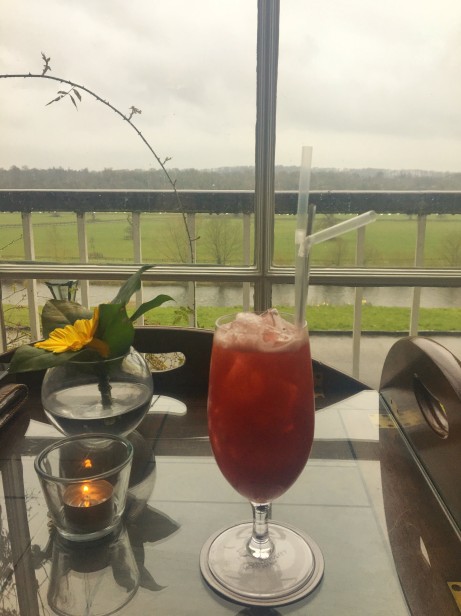 After our drinks at the Manor House we got a lift back to the Lodge with one of the staff members, who was lovely. We then made our way to the Hound Restaurant for dinner. We were seated close to the window where we could look out onto the golf course (pity about the weather). We both got the Black Pudding Croquette’s to start, which were amazing and reminded us of being back in Muckrach Country House in Speyside. I got the Salmon as a main course, which was served with a chowder and butter beans  – and was lovely.  The food was fantastic at dinner, but the service at times wasn’t great – there was a number of tables around us that hadn’t been cleared away since the last guests left and we had to call staff over to order drinks, order dessert, ask for a steak knife for Sean’s steak etc. Sean had also handed his jacket in when we arrived for dinner, but unfortunately forgot about it when we left – upon asking for it at breakfast the following morning it could not be found. 😦

The hotel was beautiful, but it was not the experience we were expecting. I wouldn’t stay again, unless we were staying in the Manor House where the experience would hopefully be different. 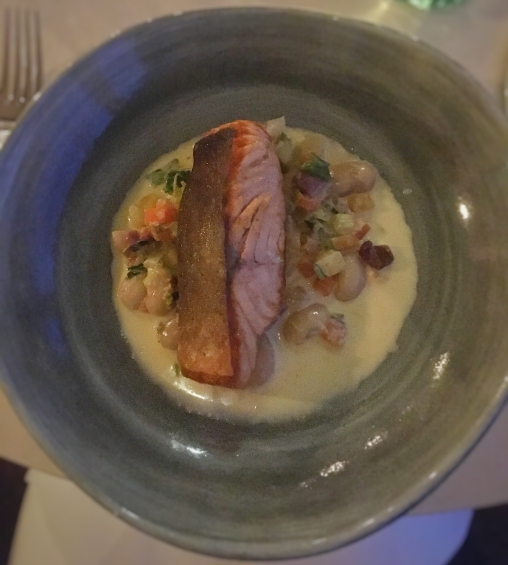